THE FACE OF DOMESTIC TERRORISM

THE FACE OF DOMESTIC TERRORISM: “Why Are Moms Like Me Being Called Domestic Terrorists?” 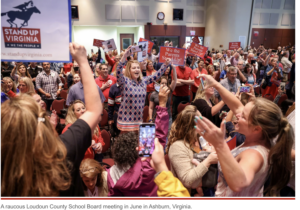 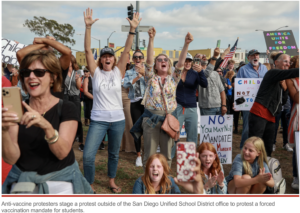 I am a mother of four, a criminal defense attorney and a lifelong liberal who is deeply concerned about the direction of New York City’s public schools. I’ve been outspoken about my views, along with an untold number of frustrated parents. For that, the FBI is considering using the PATRIOT Act against me. . . .

As it turns out, the threat is me. The threat is parents showing up to dress down school boards over their dereliction of duty. That is what the NSBA considers a crime. . . .

Many of the parents who are on the receiving end of the federal government’s chilling message are new to school boards, new to speaking up and, to say the absurd part out loud, clearly not domestic terrorists. The combination of extended Covid-related school closures; mask mandates; an increasingly extreme race- and gender-focused curriculum; and the removal of tests, honors classes and merit-based admissions has created a bumper crop of engaged — and, in many cases, enraged — parents rightfully concerned about what is happening in their children’s schools. The videos of their pleas, sometimes with kids in tow, have gone viral precisely because they are so authentic and heartfelt. . . .

You may disagree with parents like me who do not want our children indoctrinated with Critical Race Theory, masked during recess, or told that their biological sex is is not real. But in a free society, we don’t call the feds to police our fellow Americans because we don’t share their politics. . . .

Why should our children — in class, in front of their peers — be required to discuss their sexual orientation? Give their pronouns? Renounce their “privilege”? Plumbing children for this kind of personal information is grotesque and inappropriate, and it has everything to do with the worldview of Critical Race Theory. Anyone who denies as much is lying.

Do yourself a favor and read the whole thing.

And while you’re at it, you might as well read The Redneck Intellectual’s response to “A Declaration of War.”